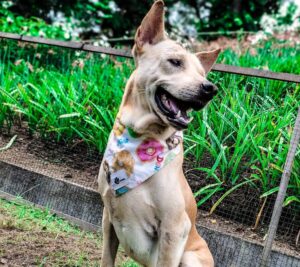 Alison came across Chopper during an adoption that was 3 hours away from her home. Chopper was scuffling across the street towards what Alison could only assume was his home. He was only walking on his 2 front legs & then maneuvered himself upside down so he could pee.  She was in shock when she first saw him because his back legs were completely mangled.

At the time, Alison wasn’t equipped to rescue him by herself as the area was open & although Chopper only had 2 functioning legs, he was still quite fast & of course being an adult male Bali Dog, could be quite aggressive so she came back the next day & sure enough, it was lucky she brought reinforcements.  During his rescue, Chopper’s owner appeared & told Alison Chopper had been that way since he was about 6 months old.  He had been involved in a road accident & they never did anything to help him. His owner was also against the idea of Chopper being rescued & once again, Alison persuaded him with her persistence & knowledge & Chopper was rescued that day.

After a lot of testing, blood works, xrays  etc, the diagnosis was that Chopper had paralysis in his spine along with double knee luxation. Alison opted surgery for him to try to correct his legs as a first step to see what would happen.

Amazingly, today Chopper functions at 80%  as a normal dog who can walk, run, jump & play just like every other dog.  Due to his muscles being shortened throughout his entire life, he doesn’t walk at full height but at half mast but that doesn’t bother him one bit.

Chopper would suit a family with no kids & no other dogs for him to be fully happy.