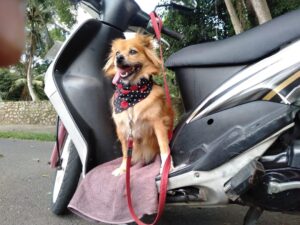 Jasper was found abandoned & confused on a very scary & super busy road weaving in & out of traffic.

Alison asked his reporter to immediately catch him & take him to the clinic.

Jasper had terrible skin conditions that were left untreated for a long time but not only that, the vets confirmed he’s completely blind.  Such a cruel act was bestowed on him to not only have been neglected until he went blind but to also abandon him on one of Bali’s smallest but busiest roads.

Jasper left the clinic after he was neutered & continued his treatment & rehab at our senior safe house until he was fully recovered.  He has adjusted well to his area, let alone the entire house & gets along with all the dogs. Whether the other dogs are tolerant to him bumping into them when he’s playing or walking around is another story but he manages well with the senior pack under supervision.

He absolutely loves going on his walks & has completely mastered the art of his other senses to get him around.

He is a dog that completely loves life & will bring absolute joy to any home.  His adopters would actually be very lucky in this instance & of course vice versa.

Jasper will most likely do better in a home that hasn’t got a pool or has a pool with a small fence around it.