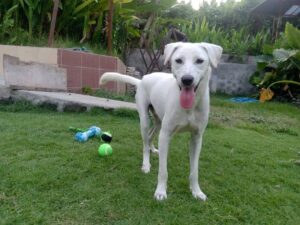 Ajax was deliberately abandoned at the beach in front of WenAven before the special needs sanctuary was opened. He was involved in some kind of road accident that has caused his partial paraylsis. I was alerted to Ajax by a local woman & as she led me to him, he was hiding between the tall grass. As we approached, I could see he was terrified & tried his hardest to shuffle away but couldn’t. Of course when we went to catch him, he protested in fear but as soon as I picked him up, he calmed down & realized we weren’t there to hurt him.

Ajax was taken to the clinic where he received treatments for blood parasites, had xrays taken as well as a Myelography to assess his nerve damage.

Ajax can now function 70% as a normal dog despite his back half falling to the side when he walks or runs.  When he gets excited he starts jumping around like a kangaroo happily.  He doesn’t know he’s any different.

Surgery was discussed however the vet here suggested it was high risk. We are not as equipped here as the western clinics so I decided to not risk the way he is right now. This little guy has also received accupuncture & steroids to get him to where he is today.

He doesn’t require pampers or pressing & would really enjoy a house with a smooth terrace & garden.